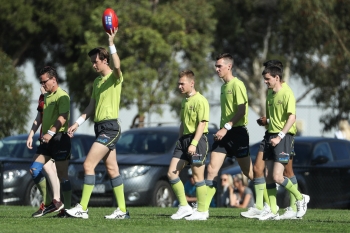 Values are important. They dictate thinking and they dictate performance and focus. In 2013 the umpiring body decided as a group what they would like their five core values to be and as an umpire, we strive to deliver on these in everything we do.

The core values of the WRFL umpiring body are:

An umpire is one of the most visible people on a football field and as such, everything they do can be called into question. Looking and behaving professionally is the most important part of umpiring. It is the first step towards earning respect, since when you look and act professionally, you cannot be questioned.

Professionalism starts on the training track: be present, work hard, don't make excuses, listen to feedback and take it onboard - remember that you're not perfect and no matter who you are and what you're doing, there is always somebody better at it than you are, there is always room for improvement.

It continues in the preparation for match day: don't drink excessively the night before a game, hydrate yourself, eat well, get plenty of rest. On match day: arrive early, be neatly dressed and bring a clean uniform, chat to the players and officials, make sure everybody knows you are there.

During the game: do your best, work hard, back yourself, stand straight and tall, treat every game the same regardless of whether it's a Division 3 reserves or a Division 1 seniors, work with your fellow umpires and remember that for each and every player and official on the ground, it's the most important game on the day for them.

Umpiring is not an individual activity. In every aspect of umpiring, you need to work together with your fellow umpires to support and assist them through the journey.

This is just as important at training: not everybody is an elite runner. For some people, doing a 2km time trial comes easily; for others, it may be something that requires every ounce of their energy. Support your mates.

More importantly, though, on the football field, remember that you can't see everything, be everywhere. Your fellow umpires are there to support you, and you to support them. Work hard as number two. If you see something that's reportable, make a report. If you see a volatile situation and you can, get closer to back the other umpire. If an official or player approaches another umpire during a break, get within earshot and preferably side-by-side so you can support them if necessary. Talk to the other umpires on the field and remember that everybody needs to work together to ensure the game goes as smoothly as possible.

At finals time, remember your professionalism. No matter who you are, there's somebody better at it than you. Odds are you probably won't get the Division 1 Grand Final, and that's okay. Know your limitations and support your mates. They work just as hard as (and maybe harder than) you and odds are if they've gotten the game, then they've earned it.

There isn't a day on the football field (or in life in general, for that matter) where you won't be challenged in some way, shape or form.

Umpiring is about confidence. You don't have to be the best umpire in the world, but if you look and act like you know what you're doing, then most of the time the players you interact with will behave accordingly. Build your skills, learn your craft, but most importantly, be confident in yourself and your abilities. Nobody gets it right 100% of the time. Accept that you will make mistakes. You may even realise immediately after making a decision that it was a bad one. It doesn't matter. You can't take it back, so be confident, back yourself, and move forward.

Back yourself and support your fellow umpires.

Umpiring is about fun and enjoyment. It's about pouring everything you have into it for at least two hours a week on gameday, and about working hard to get the most out of yourself at training. Don't just enjoy umpiring... love it, and pour the same passion and energy into umpiring that you would any other task you really enjoy.

As umpires, we are focal points for many players, spectators and officials. As such, we must exhibit the characteristics of an umpire at all times. We must lead by example. Do, rather than say. If you expect a player to be courteous to you, first be courteous to the player. If you expect somebody to be calm and not raise their voice when speaking to you, treat them the same way. Lead by example in everything that you do, from having a clean and spotless appearance to being fit and keeping up with the play and trying your best at everything that you do.